Felix Mendelssohn (1809–1847) and Johannes Brahms (1833–1897) were among the leading composers of their age. This show presents the numerous links between the two Hamburg-born composers and thus traces a constellation that until now has scarcely been examined. After Mendelssohn’s death in 1847, the young Brahms directly experienced the posthumous praise of Mendelssohn among the friends of Robert Schumann. Numerous items document the Schumann circle’s interest in Mendelssohn.

Beyond this, the exhibition focuses on other Mendelssohn experiences that Brahms had as a pianist, conductor, composer, and collector. As Wolfgang Sandberger puts it: »Despite all differences in temperament, life conditions, and career, there are several astounding commonalities. These include a shared enthusiasm for the music of the past. The exhibition features a precious loan from Gesellschaft der Musikfreunde in Wien, the Mendelssohn autograph manuscript of the motet ›Mitten wir im Leben sind‹. Brahms once owned the score and presented the work in 1864.«

Brahms valued Mendelssohn in many ways, as attested in the following witticism from 1874: »I would give all my works to write an overture like Mendelssohn’s The Hebrides«.

Additional aspects of the exhibition include their enthusiasm for Switzerland, which served both composers as a source of inspiration, and their relationship to Richard Wagner and the genre of opera. The exhibition shows for example Wagner’s 1850 text Das Judentum in der Musik, in which he denounced Mendelssohn. He also polemicized against Brahms and his »church of abstinence« where only chamber music is played. The exhibits on Mendelssohn’s failed opera project Loreley based on texts by poet Emanuel Geibel even lead to Lübeck.

Under the direction of Wolfgang Sandberger, the SHMF together with the Brahms-Institut held an international conference on Mendelssohn on Saturday, July 5 starting at 9:30 at Lübeck’s Behnhaus Drägerhaus. Entitled »Mendelssohn und die deutsche Musikkultur« (Mendelssohn and German Musical Culture), the conference explored Mendelssohn’s work as a conductor, organizer, founder of a conservatory, and general music director, making him one of the greatest influencers in the history of German musical culture. Experts discussed his relationship to literature, painting, and religion and also critically examined prejudices about Mendelssohn’s personality and his music, which was often called »educational music« or »religious kitsch«. A documentation of the exhibition and conference is available from the publication series of the Brahms-Institut (edition text + kritik).

In Cooperation with:
Schleswig-Holstein Musikfestival | >>Info 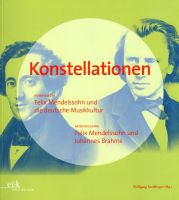